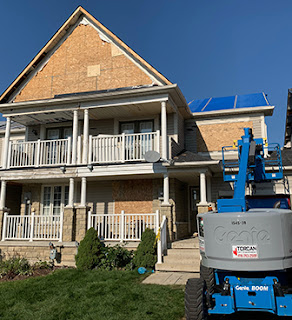 This is actually a 'feel-good post' - not a 'woe is me".
As you may have heard, our city of Barrie suffered a tornado attack in mid-June of this year (2021).  Our home was not one of the hardest hit ones (some aren't even standing anymore), but certainly became un-inhabitable.  For example, the back wall (not shown) pulled away from the flooring by up to eight inches!  ...So, off to temporary accommodations for the foreseeable future.
For once, I was glad my wife was out shopping!  If she had been home, the French doors upstairs might have slammed into her as they flew open, letting the storm inside her office!  By the way, it's an odd feeling to see shingles and branches inside the upstairs office and hallway!

For days, it seemed like nothing was happening with the place.  Roofers had only nailed a small patch over the area where you now see a large blue tarp (see image) and boarded up the windows.  ..And then - another 'stand-still'.

Time estimates for the repairs have been anywhere between six months and two years!  It's been looking more like it'd be the latter, than the former!  Then...the other day...  A neighbour texted us, "There has been a flurry of activity in your home over the past few days", which is welcome news for sure!  Thanks for the update, Bob & Julie!  Let's hope this means less time, rather than a longer time before our return.

Thankfully, the water that was dripping throughout the house hadn't touched my studio area and I managed to get all my recording equipment out safely.  I've even been able to do my voiceover work while in our temporary location.

Hopefully, if all goes as planned, I'll be rebuilding the studio in there - bigger and better next time!